E. coli: What You Need to Know

Escherichia coli, which is normally found in the digestive system of healthy people and animals, can be benign--causing only mild diarrhea. However, sometimes it can lead to severe stomach cramps and bloody diarrhea.

If you are among the few who get infected with E. coli O157:H7, you will likely recover from mild symptoms within a week but some individuals may face life-threatening complications.

After being exposed to the bacteria, symptoms of an E. coli infection usually emerge three or four days afterward but sometimes as soon as one day following exposure. Symptoms are:

When to see a doctor

If you have persistent, severe, or bloody diarrhea, contact your doctor.

Not all E. coli strains cause diarrhea, but one strain called E. coli O157:H7 can produce a powerful toxin that damages the lining of the small intestine, resulting in bloody diarrhea. You can become infected with this bacteria by ingesting it or having contact with fecal matter from an animal carrying the infection.

Unlike many other bacterial pathogens, E. coli can cause an infection even if you ingest only a small amount. Because of this, and unlike many other bacterial pathogens, one could be sickened by ingesting a slightly undercooked hamburger or swallowing a mouthful of contaminated pool water with enough  E. coli bacteria to make them sick. Possible causes of exposure are contaminated food or water and person-to-person contact.

One of the most common ways to contract E. coli is by consuming contaminated food, such as:

Human and animal stool can contaminate groundwater, as well as streams, rivers, lakes, which include the water used to irrigate crops. Even when public water systems use different disinfection methods (chlorine, UV, ozone)it is possible for outbreaks to occur if an area's municipal water supply is contaminated with E. coli.
One more concern for rural people is the integrity of their water supply. Many wells do not have a way to disinfect water, and it is easier for such supplies to become contaminated with pathogens than other sources because they are more difficult to monitor. This has been true in some recent instances where E. coli was present after swimming pools or lakes were polluted by stool.

E. coli bacteria can easily spread from person to person, and the infection is especially likely for family members of young children who are infected with E. coli. Outbreaks of E.coli have occurred among kids visiting petting zoos or at county fairs in animal barns.

Bacteria can affect a variety of people. However, some are more susceptible to infection than others. Factors that increase the chance that you will have issues with bacteria include:

Most healthy adults with E. coli illness will recover in a week. In more serious cases, especially young children and the elderly, there is a risk of developing a life-threatening kidney failure called hemolytic uremic syndrome.

At the moment, there are no vaccines to protect against E. coli-based illnesses, but researchers are investigating potential vaccines that may provide more protection in the future. To reduce your chances of being exposed to any type of E. coli, avoid swallowing water from lakes or pools, wash your hands often, stay away from risky foods as well as look out for potential cross-contamination.

Chicken bowl landed me in the hospital with ecoli! I’ve never been so sick in my life. Had to call the ambulance and hospital stay for a couple of days. | Symptoms: Nausea, Diarrhea, Vomiting See Less

Experience chills diarrhea nausea for three days in the Dominican Republic Santo Domingo area went to a few restaurants try to be careful but that didn’t help doctor diagnosed me back in USA with E. coli Gastrointestinal and put me on antibiotics.. This is the third time... See More I have been in different parts of the country I have come back sick | Symptoms: Nausea, Diarrhea, Chills See Less

If you have the recalled product in your home, please do not eat it, throw it away or return it to the place of purchase for a refund. 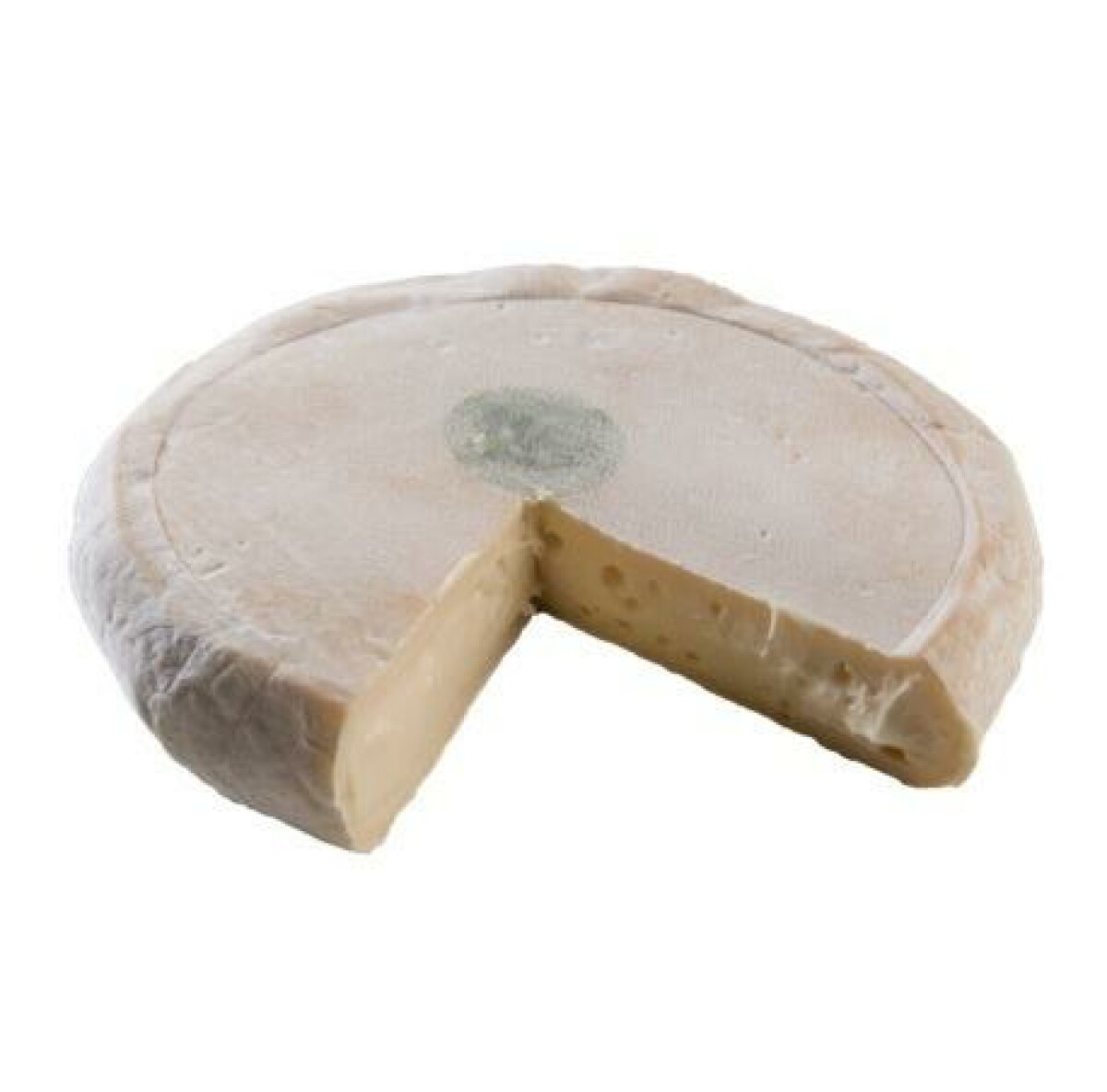 CDC, public health and regulatory officials in several states, and the USDA-FSIS are investigating a multistate E. coli O157:H7 outbreak linked to ground beef in HelloFresh meal kits. As of September 12, 2022, seven people have been reported from 6 states (MD, NJ, NY, PA, VA and... See More WA). Six people have been hospitalized and none have developed hemolytic uremic syndrome, a serious condition that can cause kidney failure. No deaths have been reported. Illnesses started on dates ranging from June 8, 2022, to August 17, 2022

CDC is advising people to check their freezer if they froze any of the ground beef in HelloFresh meal kits matching the description above. If you have it in your home please do not eat it, and throw it away. 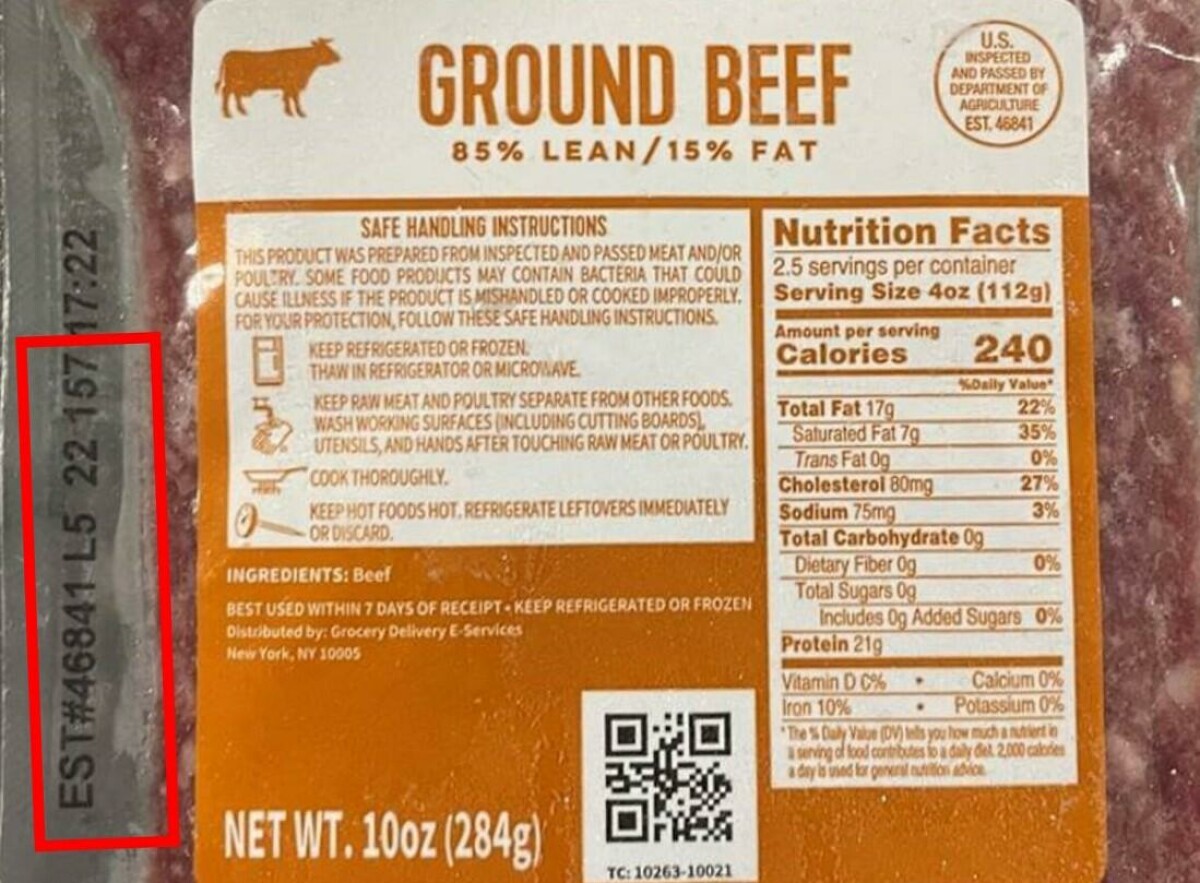 The FSIS is issuing a public health alert for ground beef products in HelloFresh meal kits due to concerns that they may be associated with Escherichia coli (E. coli) O157:H7 illness. A recall was not requested because the products are no longer available for purchase.

The affected meal kits containing ground beef were shipped to consumers from July 2-21, 2022.

FSIS, the CDC and state public health partners are investigating an outbreak of E. coli O157:H7 and raw ground beef is the probable source of the reported illnesses. Traceback information identified that multiple case-patients received ground beef produced at establishment M46841 and distributed by HelloFresh in meal kits from July 2-21, 2022. Traceback of materials used to produce the ground beef is ongoing and FSIS continues to work with suppliers and public health partners on the investigation.

FSIS is concerned that some products may be in consumers’ freezers. Consumers who have purchased these products are urged not to consume them. These products should be thrown away. 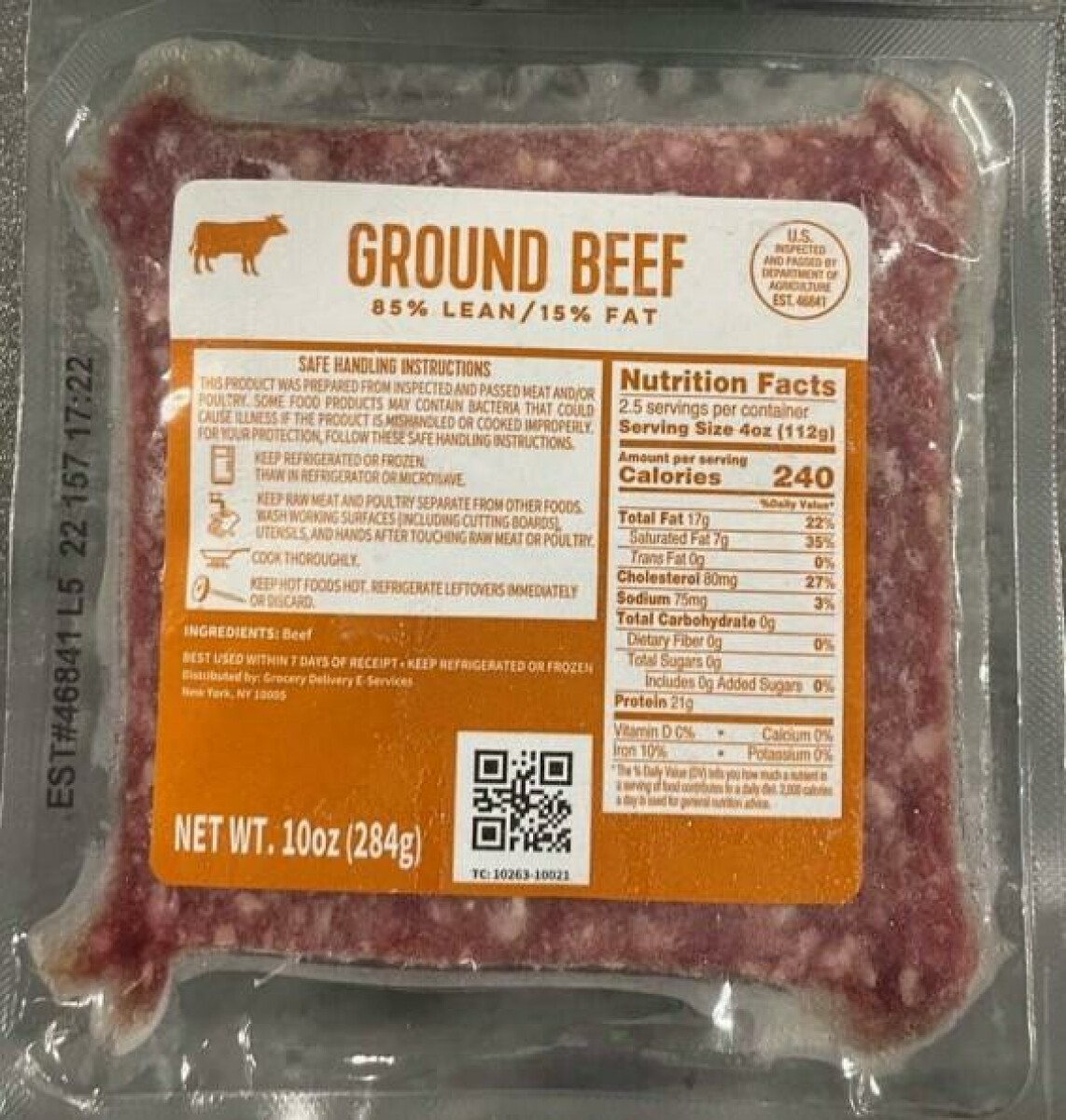 SDSU’s Environmental Health and Safety team is working closely with the County of San Diego Health & Human Services Agency to investigate an E. coli (STEC) outbreak at San Diego State University. On Sept. 6, Student Health Services notified the SDSU community of 2 cases of Shiga... See More Toxin-Producing E. coli (STEC) in the student community in 1 residential and 1 non-residential student. These students began experiencing symptoms on Aug. 27 and 29, respectively. At this time, a specific food source has not been identified for either of these cases. 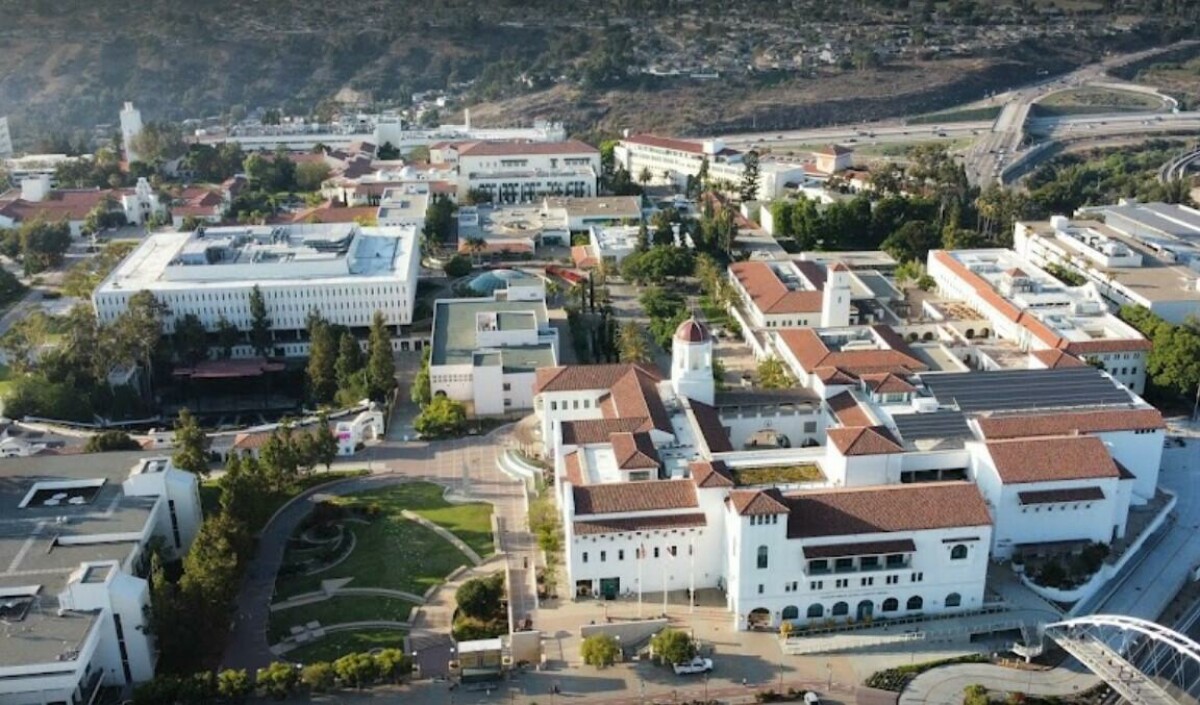 In case you are experiencing E. coli symptoms such as... See More watery diarrhea (often bloody), vomiting; stomach cramps; and mild fever, it is important to report it. It can help to detect & resolve outbreaks early and prevent others from being harmed, and it enables better surveillance. If symptoms persist, seek medical care. 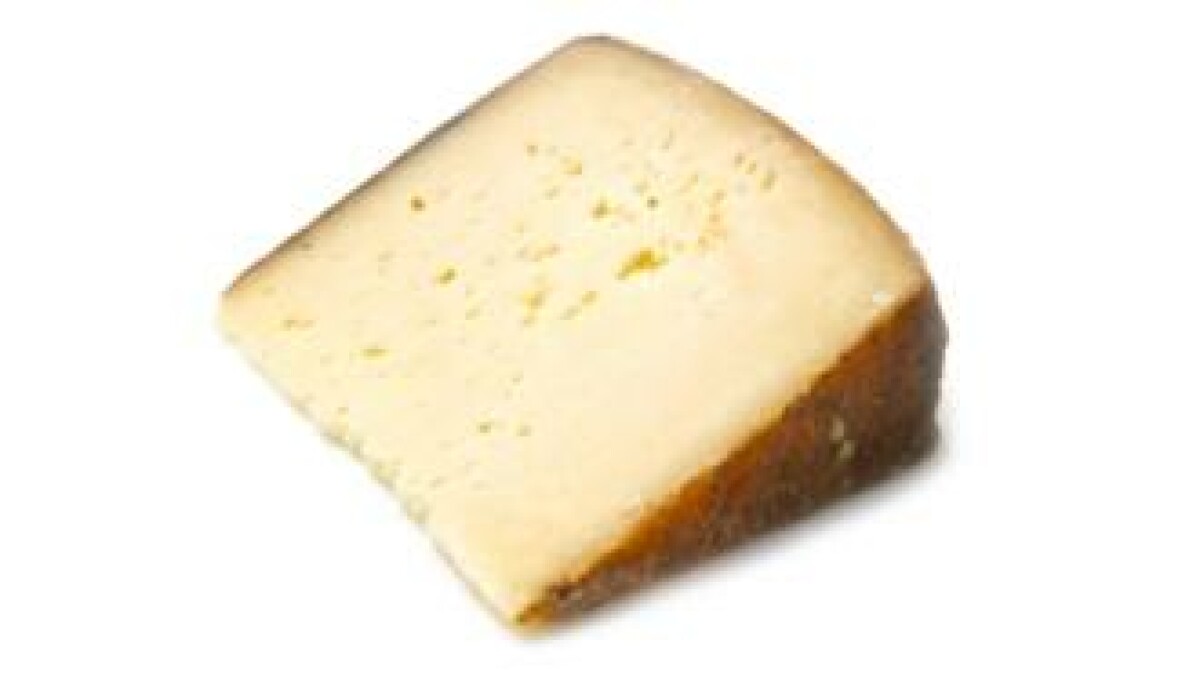 August 28, 2022, Lack of food preparation safety and cleanliness I have had diarrhea for less 12 days lost 12 pounds I’m getting ready to start on the antibiotics Prescribed by my doctor, I was diagnosed with E. coli | Symptoms: Diarrhea See Less 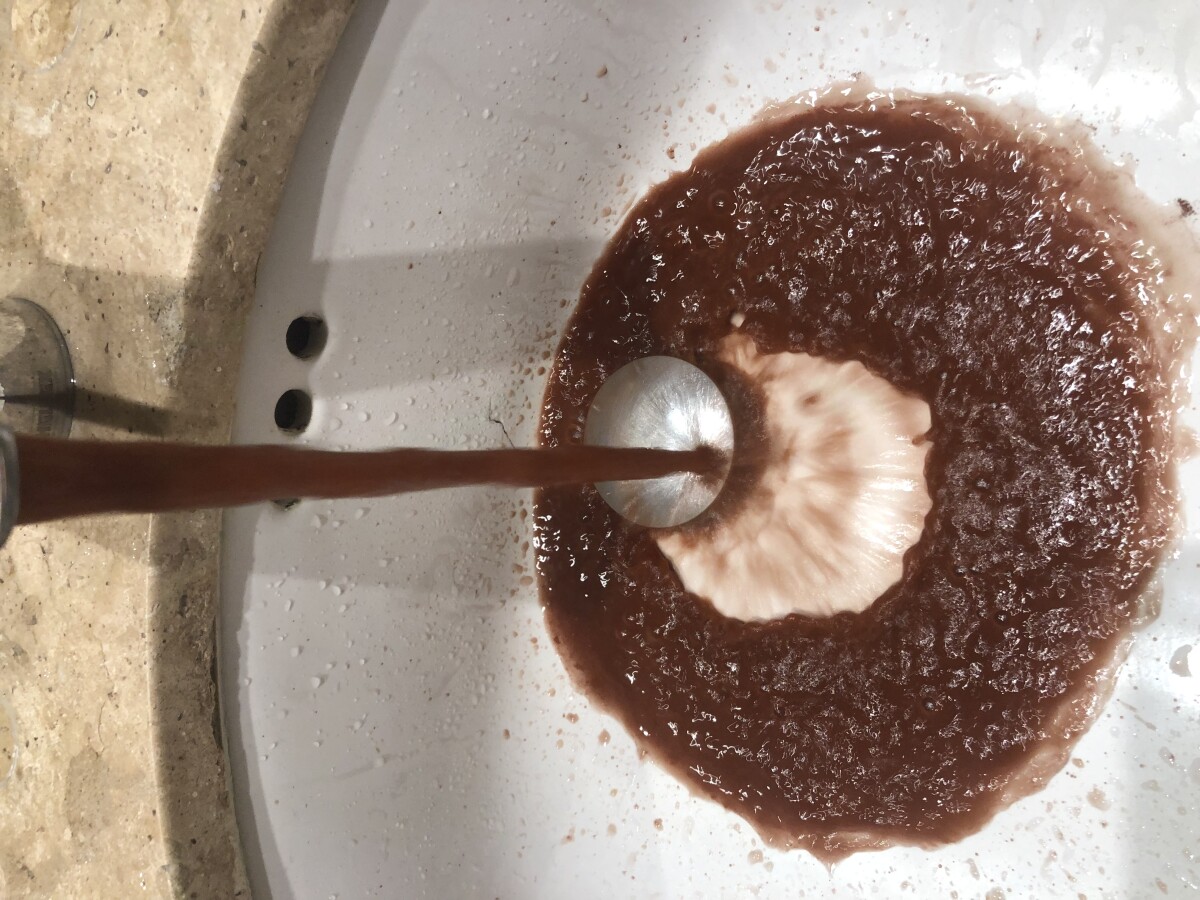 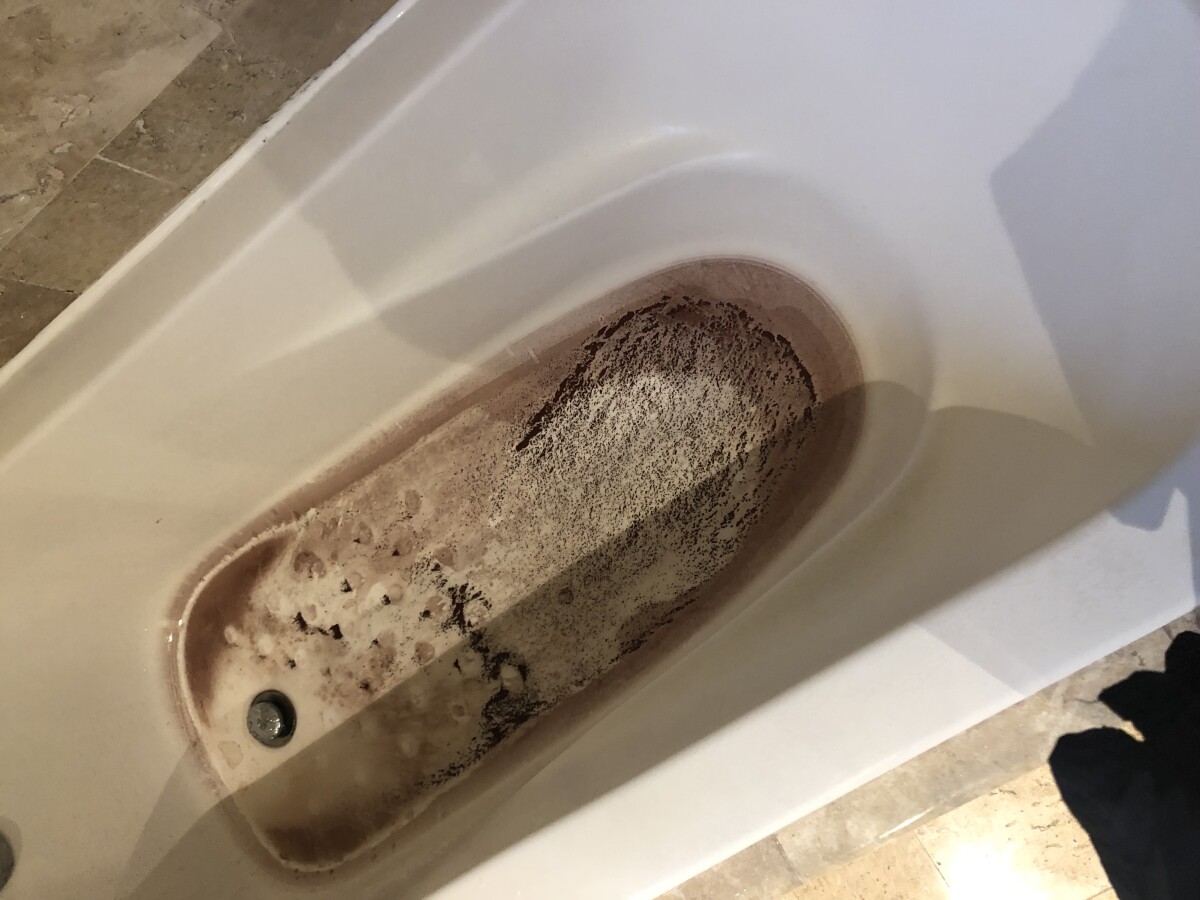 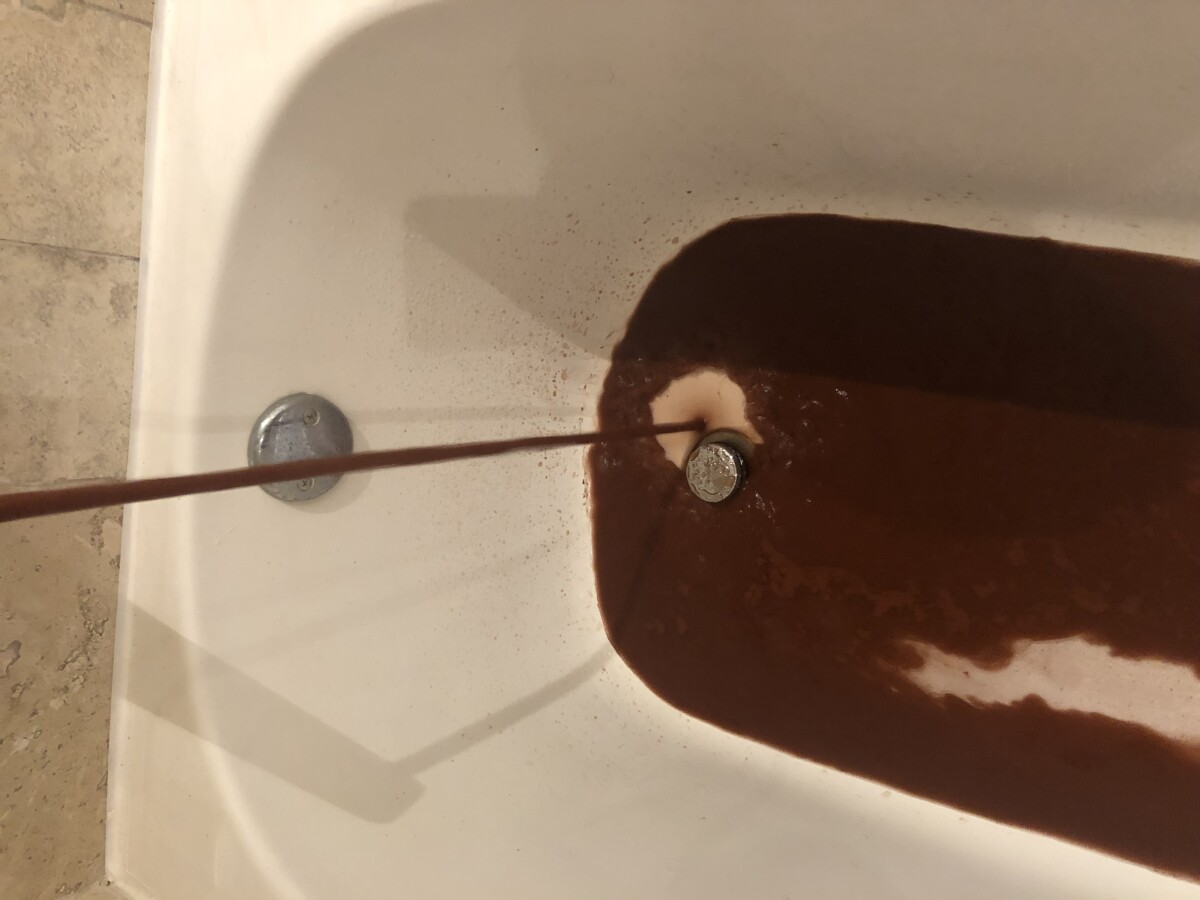 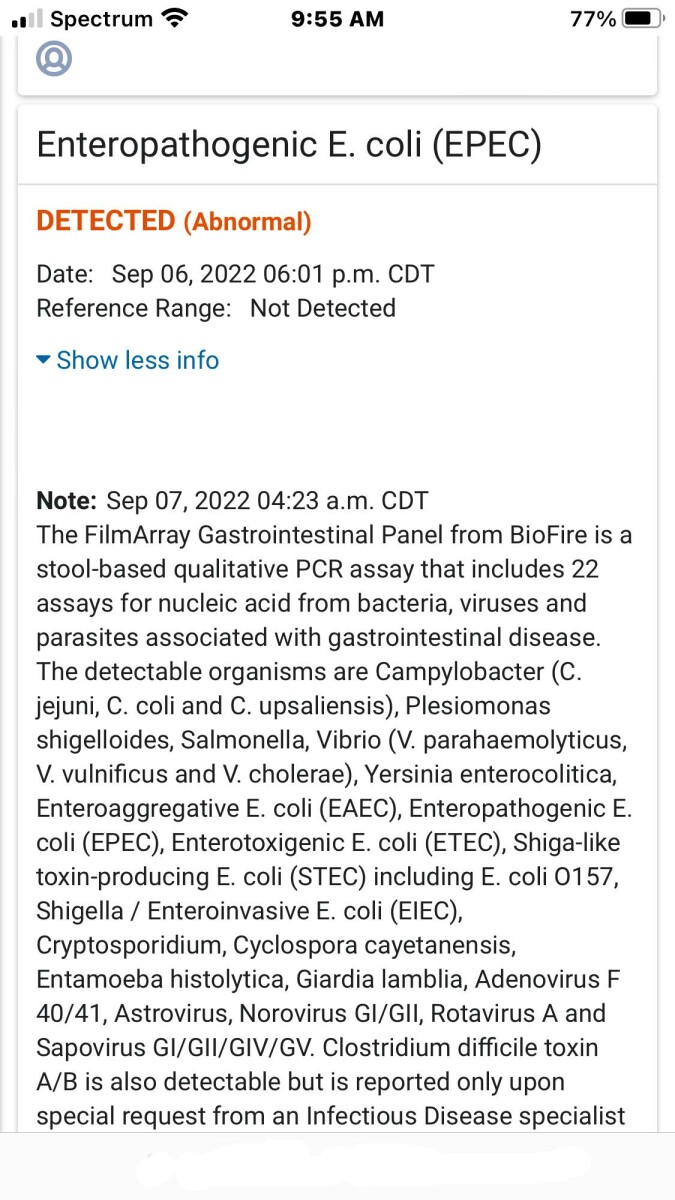 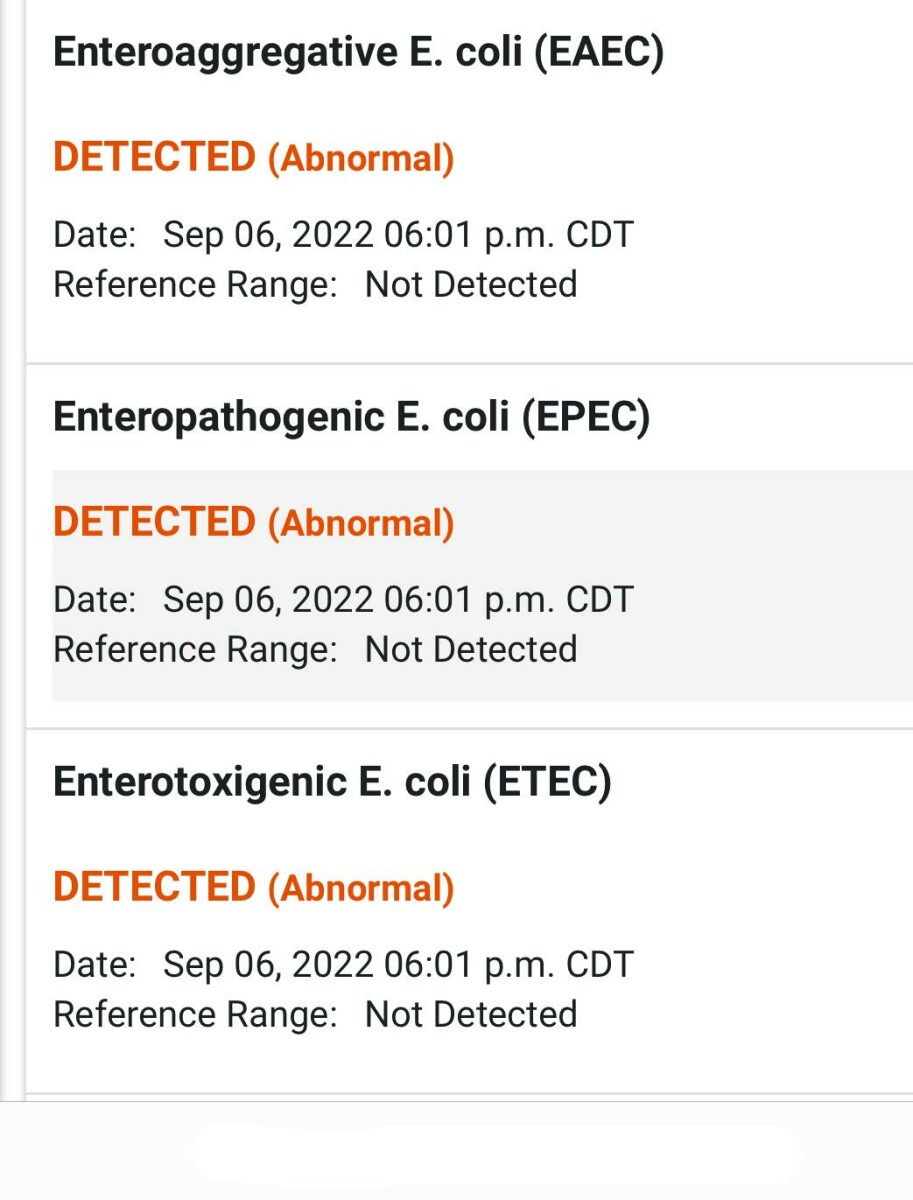 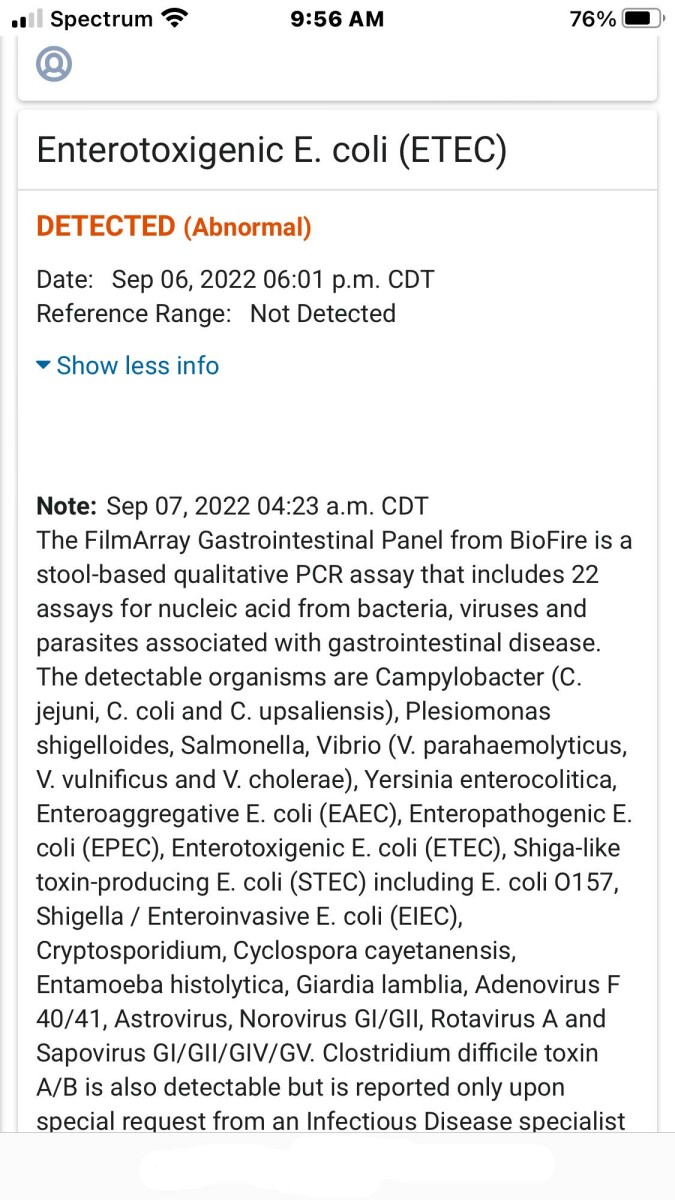 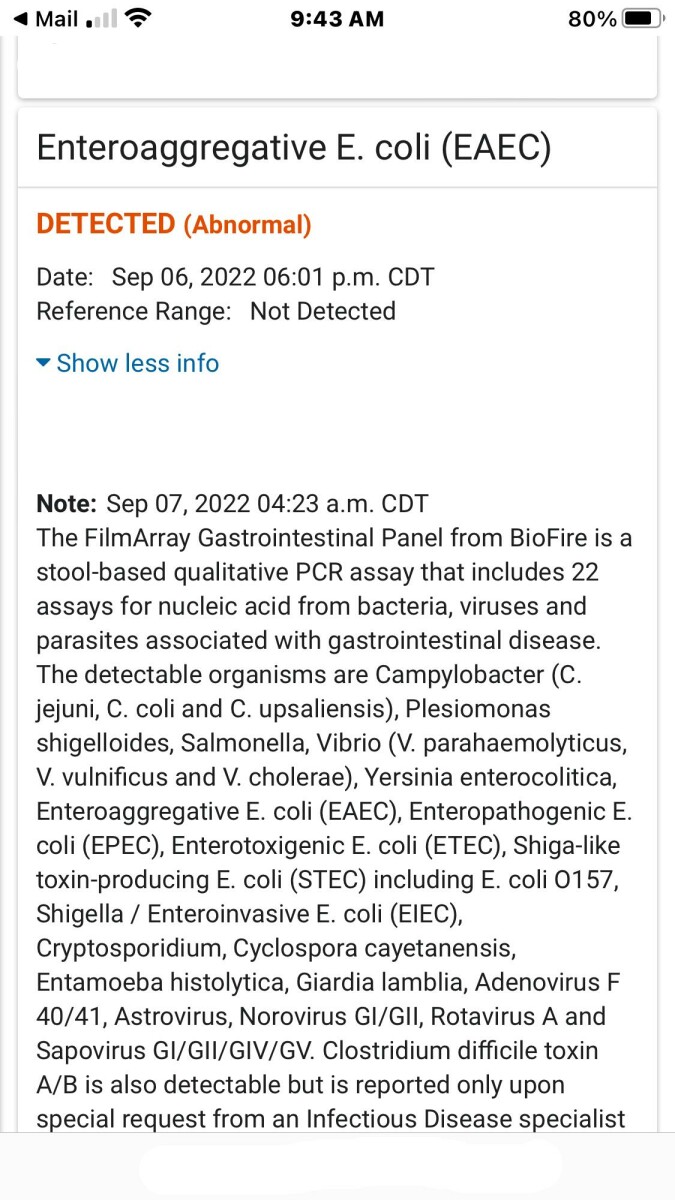 Public health authorities are investigating an increase of cases of a potentially-deadly bacteria Verotoxigenic E. coli (VTEC) in the midwest region. More than 20 VTEC cases were notified in the region between July 31st-August 27th, including several hospitalizations according to Health Protection Surveillance Centre (HPSC) provisional data.... See More

According to the news, multidisciplinary public health teams have managed and investigated outbreaks and cases in households and in rural settings, particularly on or near farms, and sites with access to a private well supply, and sources of infection are under investigation.

The VTEC strain produces a powerful toxin that can cause severe illness, particularly in children under five and the elderly. The infection can be passed from person to person, through consuming contaminated food or water or contact with infected animals or contamination in the environment. In addition to causing severe stomach pains and diarrhea, VTEC can cause a serious condition known as Haemolytic Uremic Syndrome (HUS), which results in the breakdown of red blood cells and kidney failure. A small number of HUS cases have been confirmed.

In case you are experiencing E. coli symptoms such as watery diarrhea (often bloody), vomiting, stomach cramps, and mild fever, it is important to report it. It can help to detect & resolve outbreaks early and prevent others from being harmed, and it enables better surveillance. If symptoms persist, seek medical care.