The shortage of food inspectors isn’t just a problem in the US (as we previously posted about in Chicago) but a problem all over the world, as this Times of India article makes clear. Insufficient inspection leads to more restaurants operating without inspection or licensing, which leads to more foodborne illness outbreaks.

The Times of India reports on this problem in Hyderabad, India, where the increase in both population and in restaurants has increased the strain on the Greater Hyderabad Municipal Council, the city government, which is experiencing a severe crisis in the number of qualified inspectors.

“[T]he GHMC, with a severe staff crunch, is struggling to put a check on the malpractices followed at the ever-growing numbers of food centres in the city. Ravi Kiran [the] assistant commissioner [for the] GHMC said, ‘There is a requirement of 26 food inspectors in the GHMC limits and we just have four. Even though we are doing our best, it is still not enough.’”

“I had a chalupa (chicken) and a beef taco  My daughter and I went through the drive through. Ate then went to a store. There I began to feel sick, nauseous and stomach cramps within the hour. We had to stop at a gas station for a bathroom and pepto... See More bishop. Felt better after that ”

“I purchased a ready made salad from there Saturday around 10am, I place it in my fridge, went about my day and I ate alittle under half of it for dinner around 9pm, I threw the majority of it away because it looked fresh but had a bad taste to... See More it! Almost 2hours later I have terrible diarrhea and a small fever of about 99 ” 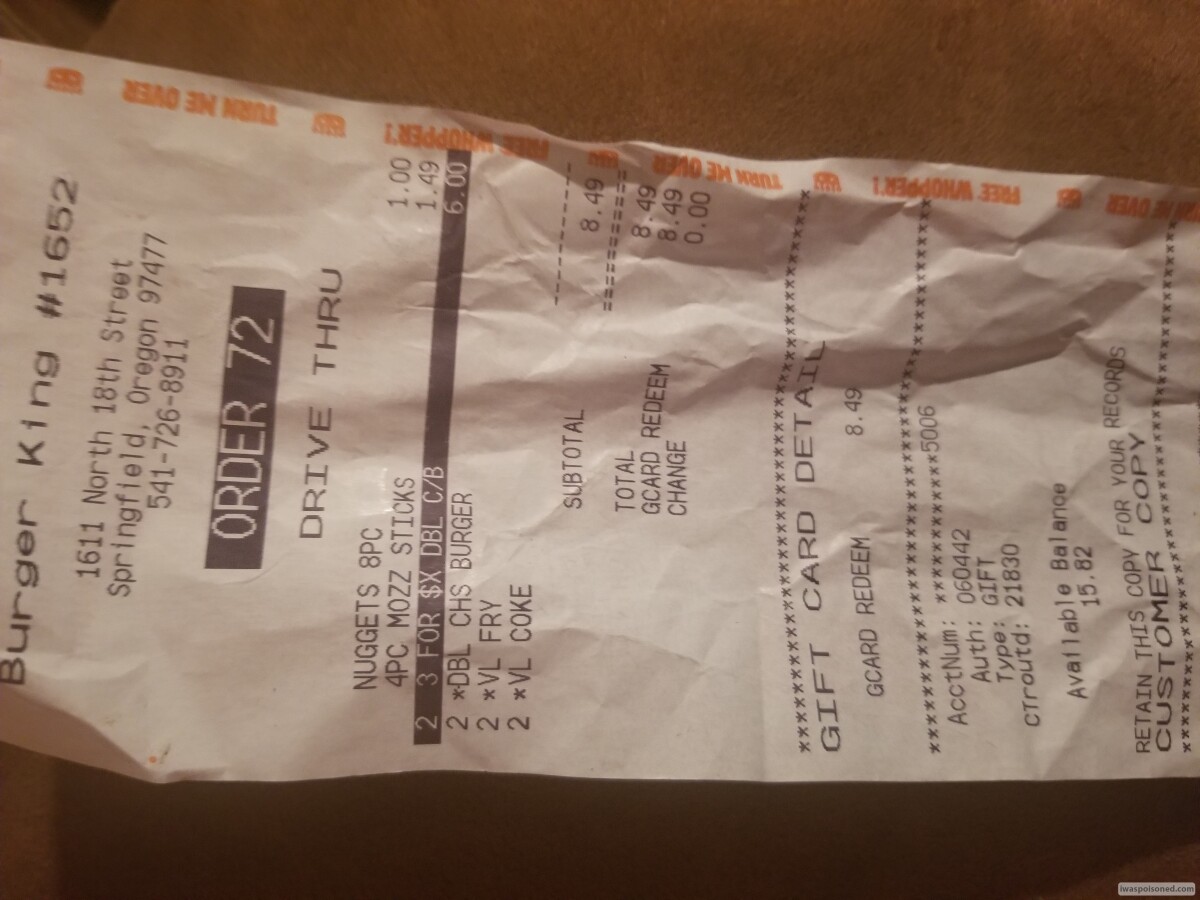 “We ate double cheeseburgers w/ baconJr.'s mozzarella sticks and French fries. About 30 minutes give or take a few we both started feeling nauseous and within the next 30 minutes I tried to talk myself out of vomiting but to no avail. It was projectile.,3x I vomited! By the 3rd... See More vomit things were happening at both ends at the same time. It was awful! ”

“Bought the frozen red bag chicken in May 22, 2020 and cooked for dinner. Ate 1 piece and it was good but then. Bit into the 2nd piece and very strange texture. I was vomiting within 30 minutes with diarrhea. It’s now the next day and I’m still nauseous. ”

“We ordered two Boston cream donuts and both started feeling sick about a half hour to 45 mins later and are still not feeling well today. We have nasuea and upset stomachs and diarrhea Two of us got a donut a piece and got sick about 30-45 minutes after consumption.... See More Both have upset stomach and diarrhea and nausea ” 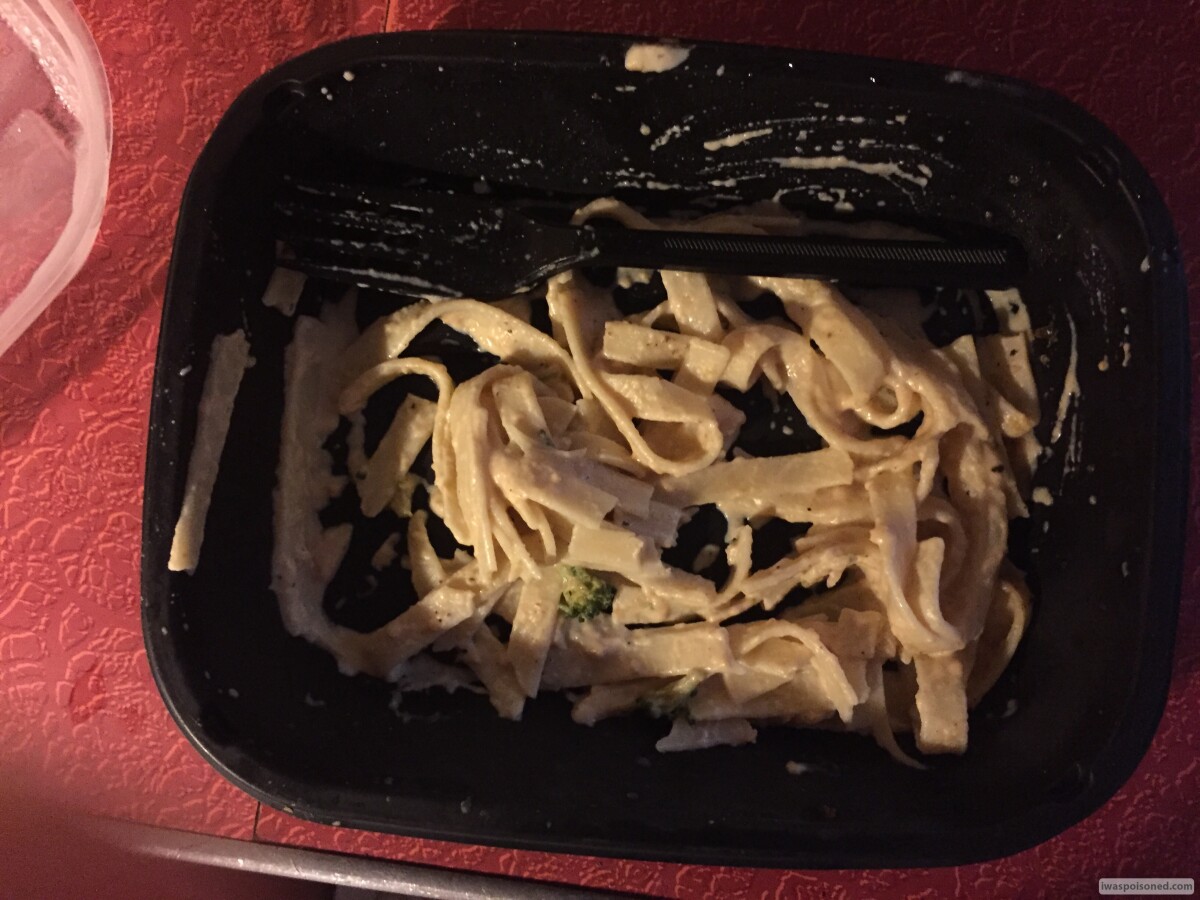 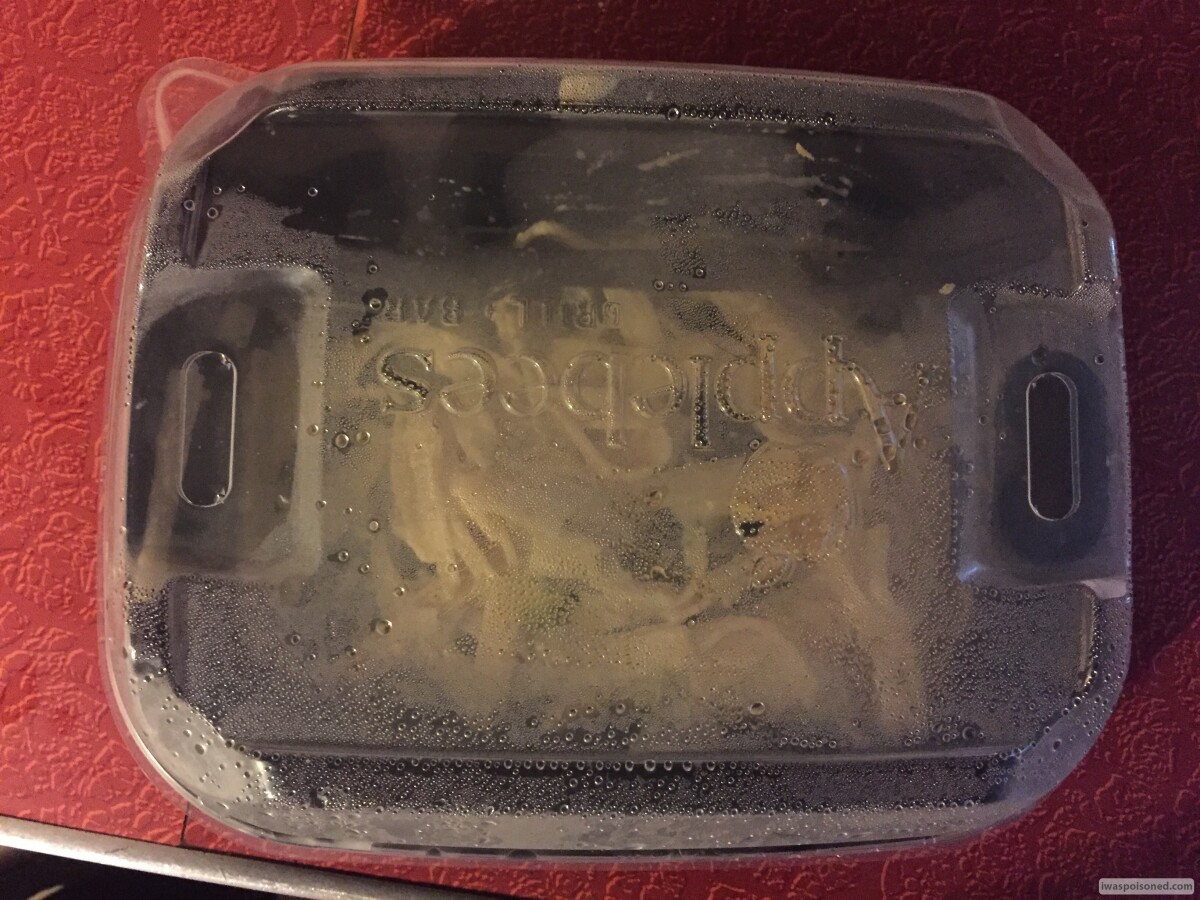 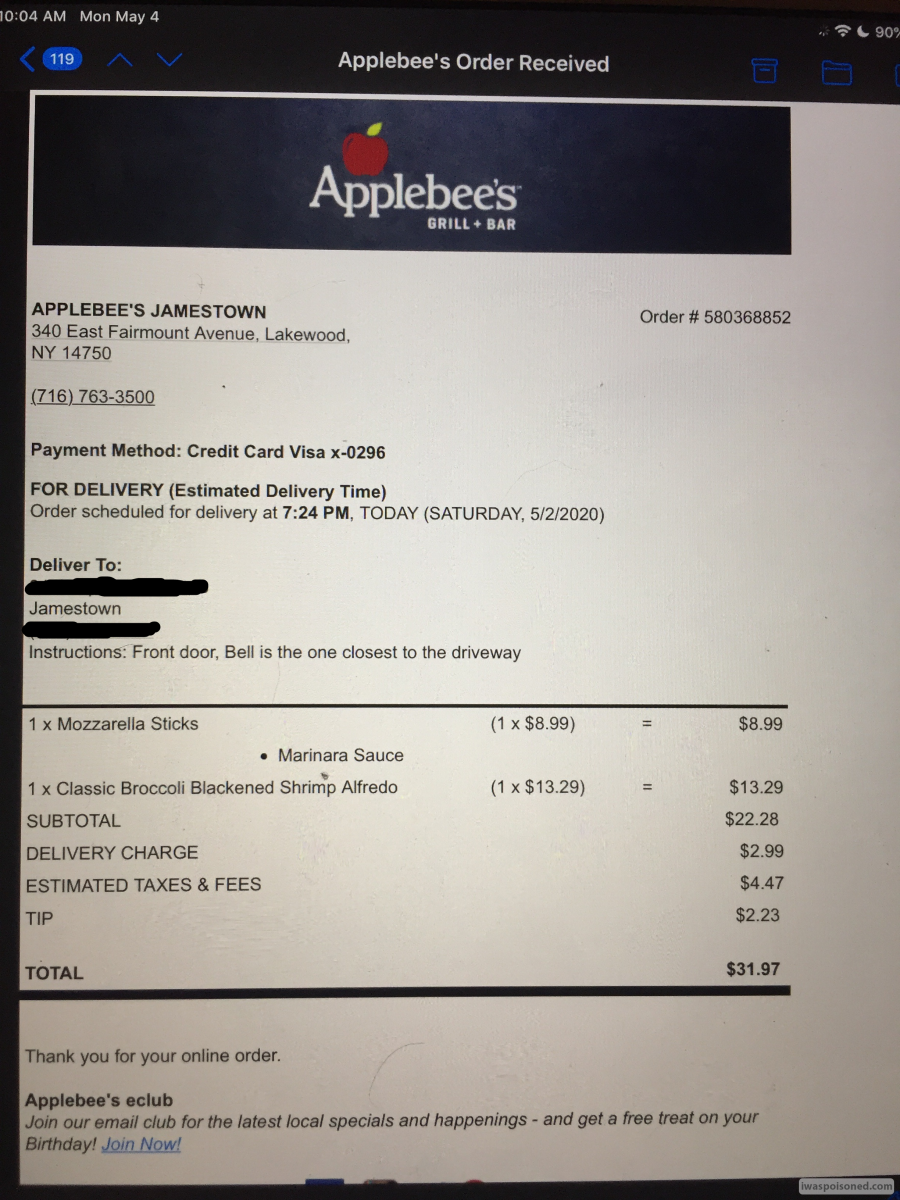 “Blackened shrimp and broccoli Alfredo  I was the only one who ordered takeout and ate it. I started feeling ill as soon as I got almost halfway thru the dish. It felt like major bloating so I drank some water and put the food in the fridge. I still have... See More what’s left over. I went to bed to sleep it off but could not sleep. 3am I woke up and had diarrhea/ major headache. Could not eat anything that entire day and was stuck in bed. At 7pm the next day I finally vomited. This is the day after that and I still am not okay to eat anything without vomiting.  ”

Type: Poisoned
Symptoms: Diarrhea Nausea Other Bloating Stomach Pain
May 19 2020 at 2:08 AM

“My family and I order it from door dash. We got orange chicken, sweet and sour chicken, teriyaki chicken, white rice and vegetables. Over night we all started feeding sick with same symptoms. Nasty stomach pain, nausea, diarrhea and bloating. ”

Type: Poisoned
Symptoms: Diarrhea Nausea Vomiting Headache
May 7 2020 at 9:21 AM

“The last three times we have eaten from this place myself, and my children have gotten sick. Diarrhea, vomiting, and severe headaches. We can eat it from any other place and be perfectly fine. ” 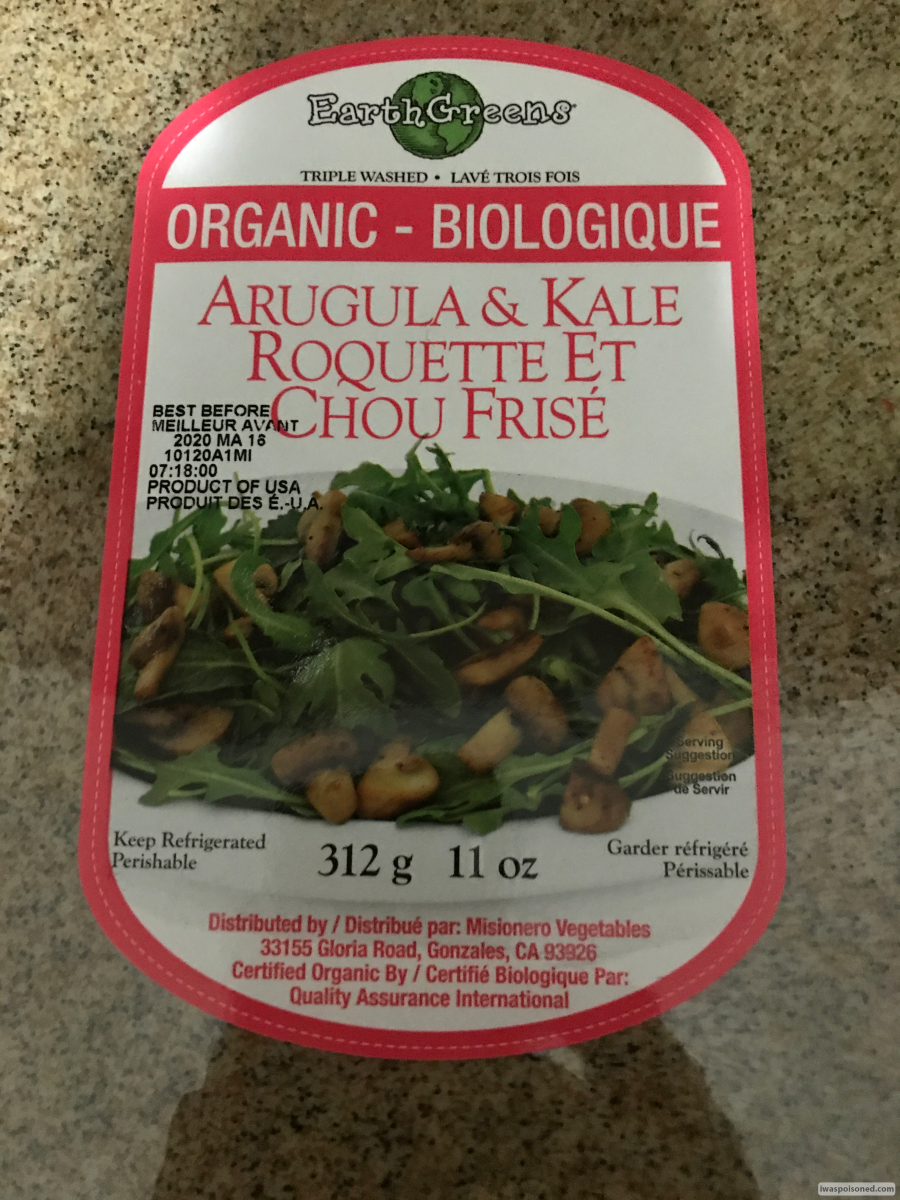 “Salad We ate an arugula & kale salad (EarthGreens, organic) at about 2pm and both got sick 10 hours later. Diarrhea and nausea first and vomiting during the night. Sick for about 15 hours. Then we were able to eat again. 2 days later, we eat some of that salad... See More again and about 6 hours later we start feeling bloated, light headed and like we’re going to vomit again. This is happening just now and it seems like this is the only product we can identify in both cases. We are currently trying probiotics hoping it helps reduce the impact.  ”

“I woke up that morning just fine. Ate some on my way to Mountain View. I ate no other food. That night I had bad diarrhea. By the next day I had a fever, nausea, and even worse diarrhea. They usually do good work but there is no way they... See More arent the source of my infection ”